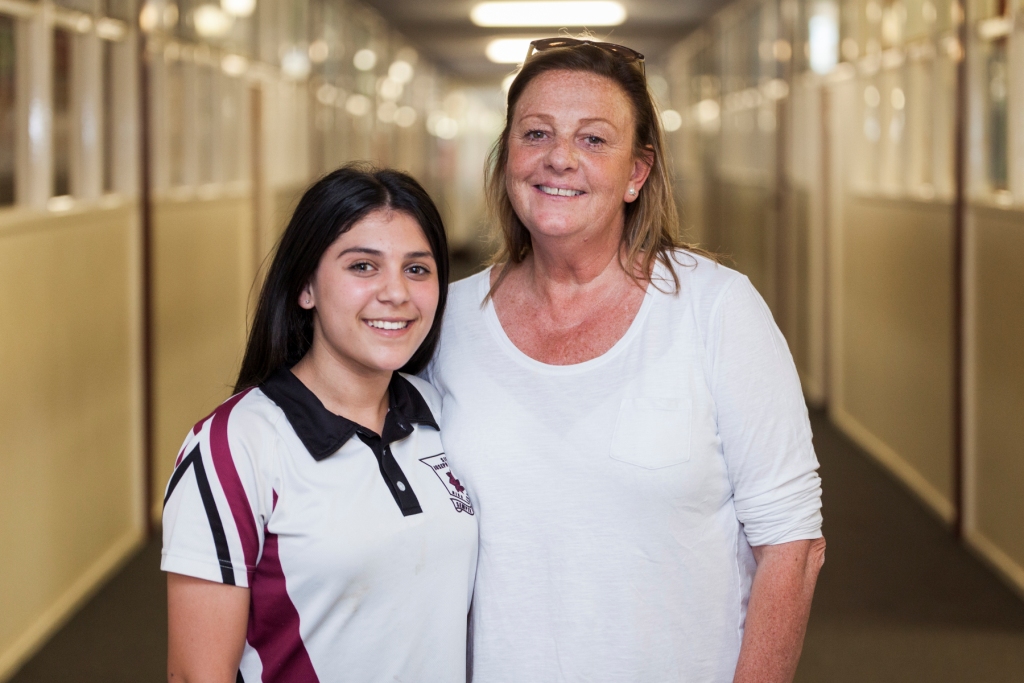 Cynthia Mikell is a single mum, the only surviving member of her immediate family, and a heck of a strong woman. Full of life, energy, and joy, Cynthia is proof that independence can be liberating, and that opening yourself up to the world just might land you your dream job.

Can you please introduce yourself?
My name is Cynthia Mikell and I was born in Wollongong, in New South Wales, in 1963. Much to my disgust [laughs].

You said it, good on you! Describe the place you spent your childhood?
OK, so essentially, I grew up in Leichhardt. My background is Italian heritage, both my parents are Italian, so we grew up in Leichhardt where most Italians were. And I went — I actually went to school at Leichhardt Public, and then in high school I went to Five Dock and Ashfield.

Were you just living with your family, or were your grandparents and your cousins [there as well]?
No, so originally we lived with my grandmother and grandfather [in Annandale], because they weren’t very well. And then we moved back to our house in Leichhardt.

That’s alright! Describe one significant memory from your childhood.
Oh, probably — I have two, but one would have to be the relationship that we had with some of our other Italian [friends]. Like the Triestine people, which is up [in the] North of Italy. We had people living in Sydney, Canberra, and Wollongong, and we would all get together on a regular basis and cook. That was probably my most memorable one. Absolutely loved it. Because our parents all came out together, and their kids I’m very close to still. One of them I see all the time and we ring each other every week, she’s as crazy as me [laughs].

You’re fluent with Italian, Miss?
Fairly fluent. I can speak the dialect, but — fluent Italian, I can do quite a good job. When I have to interpret for people, they do understand me.

Do you [speak Italian] with your family?
No, because all of my family have died now, so there’s no one.

How about your children?
Oh yeah, I still have children. But not my — I don’t have any brothers or sisters or aunties or any mother or father.

Is there a smell, taste, or image that takes you back to your childhood?
I would probably have to say the smell of gnocchi. Which is like a potato dumpling, traditional Italian dish.

Potato dumpling? Ooh!
Yeah, so it’s like a potato dumpling dish that my grandmother — because everything was made by hand, and I absolutely love — just in general, the smell of Italian cooking stays in my mind.

Do you know how to make traditional dishes?
Yes, yes. I’m not very good with gnocchi, but obviously I cook a lot of fat.

Same Miss, same [laughs]. What dreams did you have for the future when you were younger?
So, definitely when I was younger, I always wanted to be a lawyer.

A lawyer?
A lawyer.

Because it was the best?
No, I just started — I went and did a Bachelor’s degree, a Bachelor of Arts degree. And then I ended up majoring in History, Sociology, and Politics. And I loved Sociology, I’m a researcher.

But I had another friend, a young girl, [who] said, ‘I’m going to do [education] and you only have to do an extra year’. And I thought, ‘Oh, well that sounds good, maybe I’ll just trial that’, not even thinking. And then I became a targeted graduate so I got a job at this school, and I would have to say I’ve never looked back, probably one of the best things I’ve ever done.

Aw, how cute. And you enjoy the teaching?
I do love teaching, I know I make fun of it sometimes. And I know that I get a little bit cross at times, because you get very tired. But I absolutely —

A little bipolar. Just a bit.
A little bit bipolar, in a joking way. But I feel that it’s my thing, I love teaching, I love lots of elements about teaching.

What was it that made you want to be a lawyer?
Oh, so with the lawyer, I’ve always been a human rights activist. I’ve always liked fighting for the underdog, and I thought that as a lawyer, I could represent a lot of people that need representation as such.

Did you think it was a lot easier than what it was?
Um, I just thought — no, I didn’t really know when I was younger. I just thought that it would be a nice way of representing people that maybe also don’t have money, and that have had the wrong things done by them that I could help them with.

Yeah, you’re very passionate about that. What does strength mean to you, Miss?
Wow. Strength for me is so many things. I would have to say the word that comes to mind is resilience. It’s building your bridges, learning to cope with both strengths and weaknesses, attempting to improve.

You’re allowed to have a down day, but you must get up the next day, and keep going and climb that ladder. Because I think that you need to have something to strive for all the time.

Aw! Do you want to take a break, Miss? Yeah? Aww.
I don’t know what’s wrong with me, I think I’m just emotional!

Yes, so, the hardest thing you’ve had to overcome.
So, it would have to be attempting to raise my four kids as a single mum. That was a real challenge, and although you make mistakes along the way, I’m very proud of that achievement.

Good on you. You have four children?
Yes.

So not that far apart?
But they’re all kind of turning — some of them are turning one year older soon, you know.

If you have one piece of advice for your younger self, what would that be?
Gosh. If I knew what I knew now, I would be honest, I would do a lot of things differently. I think I probably would be getting an education earlier than I did, like a tertiary education, a higher education.

And I don’t think I would actually settle down with a partner as early as I did, I would change that. And I would actually focus on the education side, and travelling, and doing things for the greater world.

So you would travel more?
Yeah, absolutely. Before I would settle down and have kids.

That’s fair enough. Have you travelled anywhere, Miss?
I have travelled, but not that much, because I’ve always been raising the kids. So always on a budget. I’ve travelled a bit, I have been overseas when I was much younger with my mum, but that’s different —

Have you visited your hometown, Miss?
Yeah, because you’re visiting your relatives. So I went a little bit, and I have lived in Prague for a little bit with my ex-husband, when the kids were little. And then we separated. I have gone to a few places, like, I’ve been to Bali.

Was it nice there, Miss?
Yeah, beautiful. Phuket, um… But that’s really about it. I have gone to some places — I’ve been all around New South Wales on the back of  a motorbike. Yeah, that was exciting.

On the back of a motorbike?
Yeah, yeah, when I was very young. And I’ve been to a number of places in Queensland, but I haven’t travelled overseas much so that’s my goal. And I have a son that lives in Hamilton Island, so I’ve gone to Hamilton Island.

Yeah, I’d love to go there. Thank you very much, Miss.
Oh, is that it?