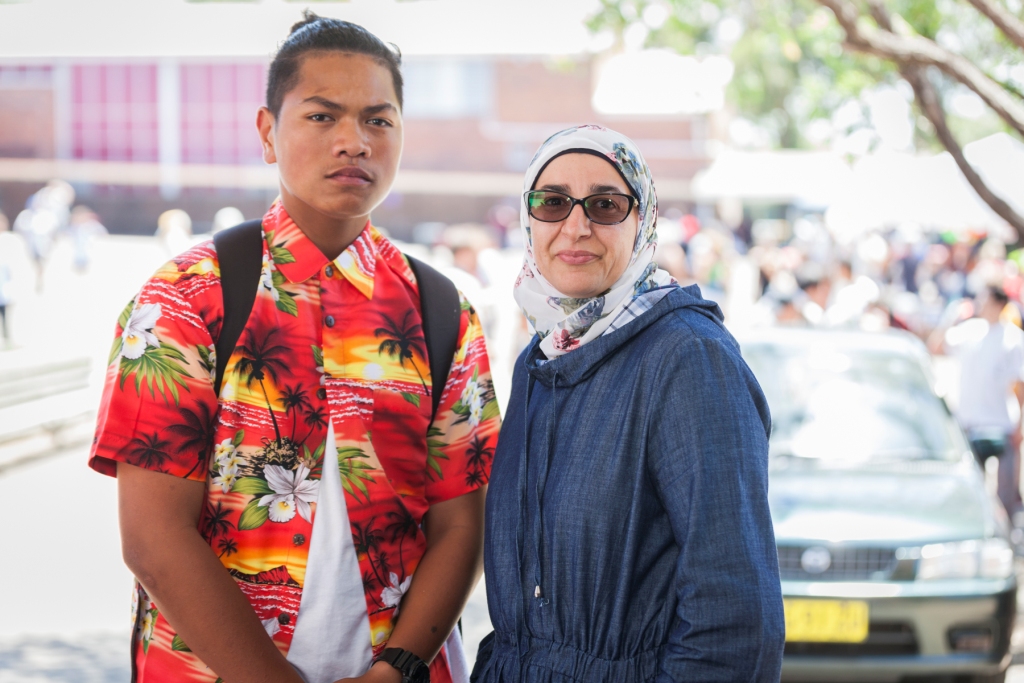 Souad Khodary is that tough high school teacher who makes sure you work hard. As a hijabi woman, she also knows what it’s like to live in judgement. Today, we open our eyes up to the fact that our teachers are human beings, too.

Please introduce yourself.
My name is Souad Khodary. I am a Maths teacher at Sir Joseph Banks High School. I have been working here for about — this is my third year. Prior to that, I worked in the area in different schools.

When were you born?
[Laughs] You know you’re never to ask a girl her age, Giovanni. I was born in 1973, and I was born in Bankstown Hospital.

Describe the place you spent your childhood.
On the streets. On the streets skateboarding, riding bikes, playing with elastics. Yeah, running up and down the street.

Do you wish to go back to that memory?
[Laughs] Well, I suppose I could still do it now if I wanted to.

Describe one significant memory from your childhood.
Ah, my childhood. I suppose when I think of childhood, I think of summer. I think of my dad cutting the lawn, and that smell of the fresh cut grass. Yeah, a simpler time.

Is there a smell, taste, or image that takes you back to your childhood?
Like I said, it was the fresh cut grass smell.

Where do you live now?
Still in Bankstown. I didn’t travel far; still live in the area.

Was your childhood rough?
No. It was — my biggest concern was probably what I was going to wear on mufti day at school. It was alright, you know. We played with the kids in the streets, my parents were alright — the odd occasional fighting with my brothers or sister; apart from that, everything was okay.

Was becoming a teacher your future job?
No. I went through high school telling my mother that I will never, ever, ever be a teacher, and then years later, I became a teacher. I wanted to go into accounting. I wanted to work with numbers.

Does this job affect any personal things in your life?
Time. Sometimes I put in too many hours at work and my kids miss me. Or I’ve got a lot of responsibilities [so] I have a lot of work to do at home. So it’s [probably] a time factor for me, where I have to invest a lot more time in school, and that foregoes some of the time that I have with my family.

Students in our class have been saying that you’re a bit too rough and give too much homework; what do you think of that?
That’s okay. I am tough. I’m the first to admit that I’m tough. I’m not rough, but I am tough, and my expectations are high. And I’m okay with that, because if I set a low bar then you will only jump as far as that low bar. But if I set a high bar, even if you don’t get it, you’re going to get close to it, and that’s my job.

My job is to get the best out of you; and they might not see [or understand] what I’m trying to do, but when they get into their senior years they will see how much easier Mathematics will be for them compared to if we didn’t do it this way. And it’s like my current Year 11s, they’re finding this year a lot easier because of what we did in our junior years. So I’m thinking about HSC, they’re just thinking about tonight.

What does strength mean to you?
Resilience. Being resilient. Do you know what resilience means? It means, even if you get knocked down, you pick yourself up and you keep going. So it’s not about physical, it’s more of a mental. If you are mentally strong, then you can conquer anything.

Would you say you’re resilient?
Extremely resilient [laughs]. A lot of things have happened in my life that have made me — no, forced me, to be a very strong person. And also in a community like this, did you notice that I was Muslim?

Yep.
With a scarf on? You need to be resilient in this community or else people will come after you, and they will [not] be nice.

Have you been through some rough times because of your —
Scarf?

Yeah, because of your religion?
Um, I haven’t. Maybe because of the people that surround me. But I do have friends who have problems walking in the streets, going shopping, dropping their kids off. But me, no, I’ve been very fortunate that I haven’t had any issues with it. But then again, I am a strong person and I think the vibe I send out is, ‘Don’t mess with me’.

What is the hardest thing that you’ve overcome?
The hardest thing I’ve ever overcome? When you’re as old as I am, there’s lots of things that you have to overcome. You know, I don’t really think that I have a hard, hard thing, because every time that something happens I try to pick myself up and just keep going.

That’s my mantra, just keep going. Just keep going. So I don’t really have one thing. You know, you’re always going to have your high days and your low days, or your moments in life and your break-ups and stuff like that. But you’ve just got to keep going.

What is a quality you love about yourself?
I love about myself? A quality that I think — well, I think one of my strengths is that I’m loyal. I am fiercely loyal to the people that I love, that is probably my greatest strength.

And right now, I don’t think that I have that freedom. Because I am constantly judged, and I think I’ve been dehumanised with the current environment. So right now, even though I walk and I go and I come and I do all that stuff, if you see me, you’d think I’m free. But in essence, I’m not really free. Because of the moral judgements, and the media portraying or creating a narrative. And while there’s always bad in the world, you know, it kind of does come back to us.

So that’s still happening now to you?
No, it’s just a personal level; like, nothing happens to me. I walk in with a ‘Don’t mess with me’ [attitude], but deep down — like, I walk, I go, I come, everyone says ‘Oh, she’s free, she can do whatever she wants’. I can.

But there is that psychological freedom that I don’t have because I do feel like I’ve been dehumanised because of my religion and I’ve lost my identity because I wear a scarf. Not because people do that to you, like I don’t act on it but I do feel it. I know it’s there and I feel that. If that makes sense to you.

Can you tell me more about your religion?
What about it, you don’t hear enough on the news about it? [Laughs]. Islam is actually a religion of peace. That’s what Islam means, it means salam.

I know that since 9/11 it’s been in the news quite a bit, and I know that there’s bombings happening and people shooting, and all those sorts of things happen. And I get it. I remember growing up and, is it the IRA? The Protestants and the Catholics used to fight in Ireland, and I remember they used to talk about terrorism there, and I get that we’re the new ones now.

But at the same time I can see the hypocrisy that happens in the media, because when someone who is non-Muslim does something wrong, they give them a story. They say, ‘He was a loner, he had psychological problems’, they give him a name. But if they were a Muslim, they’ll say ‘the Muslim man or the Muslim woman’, and there’s no empathy created for them.

So, because of rumours —
It’s not rumours, it’s just the narrative. Just the way the media spins the story. Maybe it’s just the way it sells, maybe it’s perpetuating the xenophobia, which is the fear of others — or Islamophobia, if you want to talk about Pauline. I don’t know. It is what it is. To quote Jerry Seinfeld.