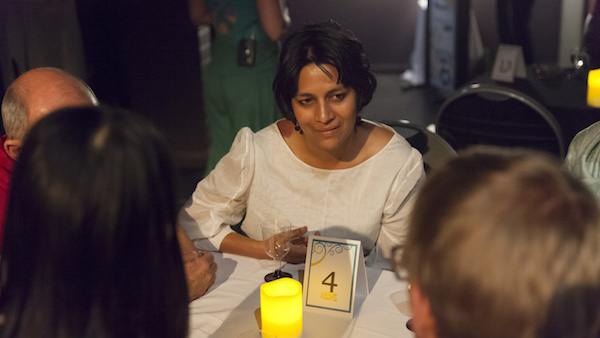 Currently residing in the culturally diverse suburb of Granville, Anjali Roberts is a social agent of change. Hailing from Hyderabad in Andra Pradhesh, India, Anjali ventured beyond the corporate world after her position was made redundant during the financial crisis of 2008. What followed was a journey of redemption through the arts community. Her realisation that one’s worth is defined by what we are willing to sacrifice for others is both powerful and inspiring.

What is your name?
My name is Anjali Roberts.

Where were you born?
I was born in Hyderabad in South India, in 1984.

Describe the place you speent your childhood?
I grew up in a small, steel-making town in India and I think everyone who lived there had something to do with the steelworks; so I knew all the neighbours. We grew up in these flats (apartments) in a place – I think it was called ‘Riverside’. I knew, in our block of flats, we had a lady above us who was a bit strange and she’d always be peeping out of her house to look at us. And in the bottom place we had this family – they were a Muslim family – and I remember that every time they used to celebrate Eid we used to go over for food and the lady would feed us all the time and put henna or mehendi for us.

Where do you live now?
I live in Granville.

Does it feel like home?
It does. It feels like home… well it did feel like home. But now that I’m not really sure about my job continuing, sometimes I think, ‘how will this home survive without a job?’ And I think it can – you just have to know it deep inside you and realise that.

What dreams do you have for your future? What dreams did you have for you future when you were young?
When I was young I wanted to be a doctor. But now I think there are other people who play a bigger role in shaping our lives, somehow. Like teachers and [role models], and people who we work with, people in our community, our neighbours – yeah, role models; people we look up to. And now I just want to be the best person that I can be, and I work with people. And I just want to feel worthy to work with the people that I work with, and see a brighter life with more colours. That’s just my dream.

What does strength mean to you?
I think, ultimately, it means knowing that the world has got your back, and believing that.

What is the most difficult thing you’ve had to overcome?
I think the hardest thing was in 2009. I was working for a corporate engineering firm during the financial crisis and I was made redundant. And I really thought that meant that I was incapable. And I think that was a really hard thing for me to overcome; to realise that it doesn’t mean that I’m incompetent. But getting through that and understanding that has been the hardest thing.

How did you turn that into a personal strength for yourself?
I think I don’t think about the security of money as something you take for granted. I’m trying, now, to make sure the other parts of my life are secure – my character [and] my skills are just as strong as the money coming into my life.

What does freedom mean to you?
I was thinking about this this morning, and to me it means to be able to choose to sacrifice for something.