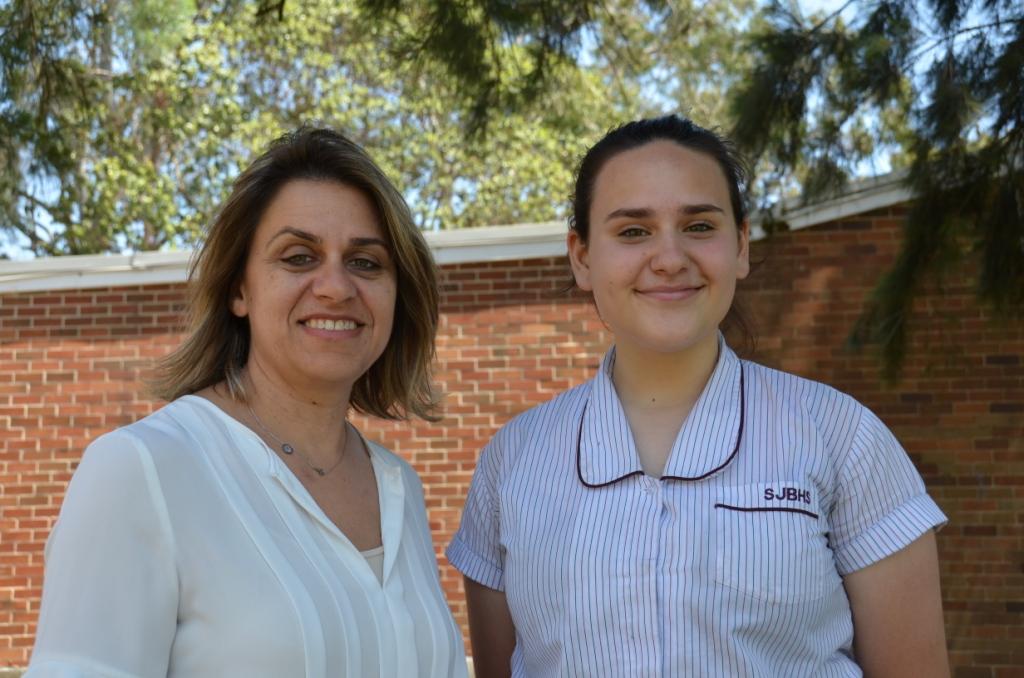 You’re strong enough to get over it, and you will. She’s a teacher with a simple outlook: You realise how little things matter later on in life, and a great day starts with pancakes.

Do I have your consent to publish this story on the website?

Okay, can you please introduce yourself?

My name is Maria Papagianopoloulos, and I’m a teacher at Sir Joseph Banks High School.

Where and when were you born?

I was born not that long ago, in Sydney. I was born in a hospital that’s now closed, called the Crown Street Women’s Hospital; which was in the city cos my parents used to live in Glebe. I was actually born in the early 70s.

Can you describe a significant memory from your childhood?

Um… oh, I guess there’s a few? Um, one that I remember quite vividly is when my little brother was born, I was five when he was born. So it’s — I remember being a bit confused but excited, my mum went off to hospital in a taxi with my dad, and I remember — I even remember her holding a red bag, that was her bag that she was taking to the hospital. And then, yeah, a few days later she came home with a baby. Um, so that was quite significant. I also remember starting kindergarten, that was also another significant milestone.

Is there a smell, taste, or image that takes you back to your childhood? Can you please describe that for me?

Oh, smells. Um, probably food? Lots of, um… pancakes, pancakes remind me of — not that we used to have them that often. Alright, yeah, pancakes… I just, I dunno they remind me of Sunday mornings for some reason. It’s not like my mum used to make them every Sunday morning, but when I smell pancakes it always takes me back to my childhood. Um, a good time. I don’t eat pancakes that much, but for some reason it’s a good memory.

Are there any funny stories your family tells you that come to mind?

Oh… I can’t think of any at the moment.

How would you describe yourself when you were in school? Did you enjoy going to school?

I actually did enjoy going to school. I liked it so much that I decided to become a teacher, and I’m still at school. Um, I haven’t always been at school, cos after I finished high school and went to University I decided to work in a different industry.

But memories of school were definitely very, very good and a decision was made to return back to the school environment. I enjoyed my friends. I wasn’t a nerd, but I was pretty academic. I liked doing well in my class, so — in my classes.

Was there a teacher who has particularly influenced your life?

Yeah there is, actually. There’s a teacher, her name’s Bronwyn Mead, she was my English teacher in Year 10 and also my 3 Unit teacher in Year 12. She’s actually a publisher now, she works — she’s got her own company called Spineless Wonders.

But she was a great teacher in that she, she…. was really inspiring, and she really encouraged us all to do our best, and that’s where I think my passion for English comes from. And for books and literature in general, because she was such an inspiring teacher.

Can you tell me about a time where you had to show strength?

Um… yeah, ah — I’m getting teary cos I think of people passing away. Cos you’ve gotta be strong, but it’s really hard to be strong. Uh, I guess — I really am getting teary — um, my grandfather was probably the first one that was close to my family that passed away. And I wasn’t that young, I was probably about 18. And, you know, he was older but still he was someone who was in our house virtually every day, so it was hard losing him.

And just a year later, my uncle passed away, and he was only 38. He had leukaemia, and I was the oldest of all the cousins so I was expected to be the strong one. But it was really tough losing someone who wasn’t that old, and you know, who died rather unexpectedly and I had to comfort his children, who were only five and seven years younger than me. That was a bit tough.

What was the hardest thing you had to overcome?

Um… I guess I’ve got this idea of grief in my head now, but you know, bouncing back after losing people that are close to you. So, you know, linking back to that previous question. Being able to — after losing someone that’s close to you, being able to get on with your life and trying to be happy, you know? And you do get over it, but it’s something that you never forget.

[Giggles] Where do you live now? Does it feel like home?

Um, yeah I live in the area. Close to school. It does feel like home, I’ve been there for quite awhile now. But going back to my childhood home, I also feel at home there as well.

Describe the place where you grew up.

Okay, it was a house in Belmore, which wasn’t too far from here. Sometimes, for a few years I think, I had to share with my brother when my grandad lived with us for a little while, but I had my own bedroom.

We had a big backyard, which was awesome cos we used to play a lot in the backyard. I remember building huts and that and also a lot of ball games. We had neighbours on both sides so there was always something going on in one of our backyards. The house is still there, still the same, my parents have renovated a little bit so the back part of the house looks different, but the front still looks the same.

What dreams did you have when you were younger?

Well, being a teacher was one of them, believe it or not. But I didn’t go down that path straight away, I was in another profession to begin with. That was one of them. And I had, like, another silly dream that I wanted to be this great tennis player. I don’t know where on earth that came from cos I didn’t really play tennis, but you know, there you go.

This pause is because we’re trying to find the next question.

Alright. Is there something that you dreamed of doing for a long time, and have you been able to achieve that dream? Why or why not?

And another recent dream that I’ve been able to fulfill is I’ve travelled to Greece with my family. It’s been 21 years since I was able to travel there, but that was really good cos I was able to reconnect with family and go to the places where my parents grew up. And where… you know, I could connect to their stories.

You know, my parents had their own battles over the years migrating to a new country, so it was good to be able to go back to see where they started and how they — where they began their lives. And I could see why they are the people they are because of that.

If you had one piece of advice for your younger self, what would that be?

I probably have lots! Um, don’t stress the little things, but I guess at the time when you’re worrying about things you don’t realise that they’re little until later. Um, and just do your best with everything, don’t give up just because something’s a little bit difficult or tough. It’s easier sometimes to say, ‘Oh, I’ll just give up’, but I think if you really want to, ask for help, and hopefully by doing that you’ll be able to achieve more.

Well, thank you for letting me interview you. Just one last question, is there anything that you’d like to know about me?

Yes! Tell me, um, what you think strength is?

[Laughs] Yeah, yeah, soI agree with you. I think it’s something from within, it’s not necessarily justthat physical strength. Uh, thank you Mariam. Thank you for interviewing me.

No worries, thank you for letting me interview you.

Don’t be afraid. Be real