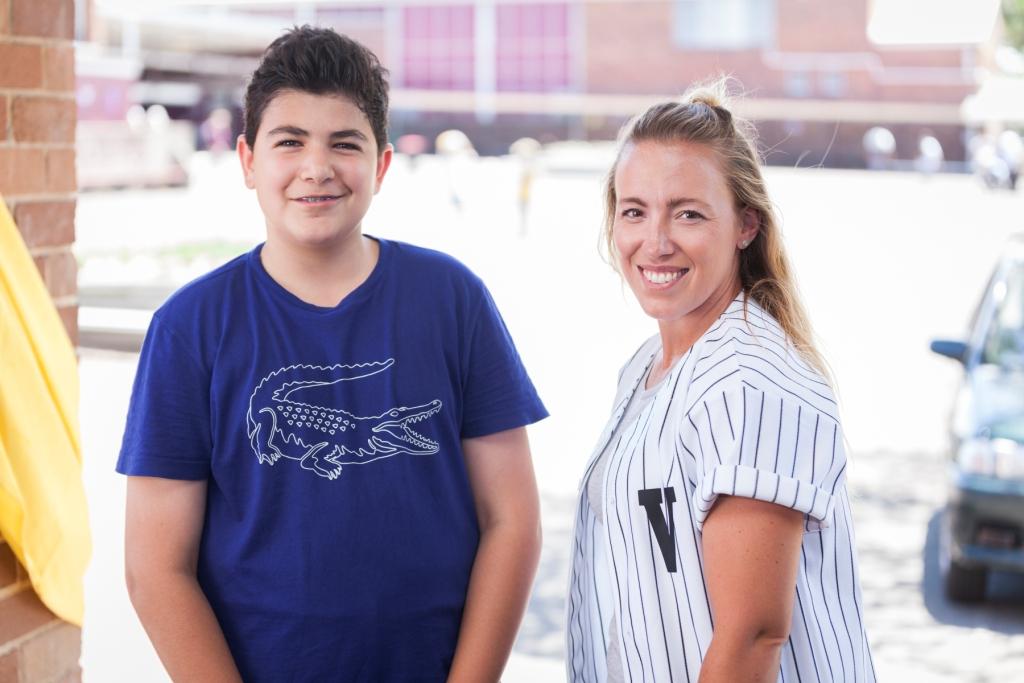 Allira Cadogan grew up in an idyllic Aussie setting, between the bush and the beach. Her active childhood was disrupted by the divorce of her parents, but that only served to make Allira stronger. Today, she teaches us all the importance of having a laugh, and letting things go before they start to define you.

Could you introduce yourself?
My name is Allira Cadogan, I’m a teacher at Sir Joseph Banks High School. Umm, and I’m Saadi’s favourite teacher.

Describe the place you spent your childhood.
I grew up in Helensburgh, which is kind of like — it’s near the water, so it’s probably a five minute drive from the beach, but it’s also surrounded by bush. So it’s — you know, it’s got a national park on one side. There’s a coal mine there; it was like a smaller sort of — not a country town, but sort of like a small town at the top of where Wollongong starts. So yeah, it was quiet. Quiet but close to everything.

I think some of the more significant things would be around my sport. So, I know when I was fourteen I think it was, I got Silver. I used to do Surf Club and I sprinted — that was my event, and I got Silver. So I remember that being something I was always proud of, because no one in my family really played a lot of sport, but I did.

Did the divorce affect your life in any way?
I think it did — at the time my parents were really good because they made it sound like I was getting two of everything. So it was like I got two Christmases, two birthdays; I got to have two rooms — so they did a good job like that.

But I think the older I got, the more it was — not stressful, but I used to have to go to Dad’s on the weekends and Mum’s during the week. So I’d wake up Monday morning at Dad’s house, then I’d go home Monday afternoon to Mum’s house, stay at Mum’s all week then on Friday [after] school I’d go home to Dad’s house — so it was just, I don’t know. I found it confusing and hard to keep up with when I got older. Especially when [there was more] schoolwork, having two households was hard.

Is there a smell, taste, or image that takes you back to your childhood?
Sunscreen. The smell of sunscreen.

Can you describe that for me?
Um, when it’s — like, if I — it’s a special brand of sunscreen, but if I smell Banana Boat sunscreen it takes me back to when I was at Surf Club. Because I grew up on the beach, pretty much. And I used to do Volunteer Lifeguarding as well, so all of those memories I have from when I was younger just take me back to that smell of sunscreen. That’s that.

Where do you live now?
So, now I live in Caringbah. I live with friends. So, I live in a townhouse with three other people. One I know from High School, one I know from University, and her partner as well. So we all live together.

Does it feel like home?
Nah, it doesn’t. It doesn’t feel the same. It does in the sense that you’re living with your friends, and that feels nice, but it doesn’t — I think really, the place I grew up will always feel like home because I spent so much of my childhood there.

What dreams did you have for your future when you were younger?
I wanted to be a firefighter when I was young, but I’m so short and small that I thought I wouldn’t actually be able to do it. And a lot of the physical things I didn’t think I’d be able to do.

Um, I think when I was younger — I also just wanted to be good at sport. I remember just always — like, even when I did Rep. trials and stuff, I was very passionate about achieving at sport.

What dreams do you have for your future now?
I’ve let go of the sporting thing but I am a PE teacher, so I’m kind of holding onto that a little bit. But I think in my future I just want to have — like, I do want to have a family, I want to have kids, and I just want to be content. So, you know, have enough money so I’m not stressed and be able to go on holidays and things like that.

What does strength mean to you?
I think for someone to have strength or to be strong, I think — I link that a lot to the word ‘resilience’. So, I think people that are strong tend to be very resilient people; they can bounce back. So, when stuff goes wrong, having strength means you’re able to turn around and get back to it.

Now that I’m older — I got diagnosed with Rheumatoid Arthritis when I was twenty-two. Which means that my immune system is attacking my body, and mostly my joints. So I find a struggle with that, just knowing that — because I love sport so much — sports that I’ve played since I was 8-years-old I can’t [play] anymore. So I found that a bit of a struggle myself.

If you want to, can you explain “abuse” from your Stepfather?
Yeah, so he was very much — it was a very verbal thing most of the time. It wasn’t necessarily swearing, it was just yelling, a lot of yelling. He would yell at me a lot, and just for little things. Like, I remember one time coming home, we’re eating dinner. It had been a mufti day at High School, I would’ve probably been in Year 9 and my cousin was Year 7 — so his niece was in year 7. And some kids at school had said that she had dressed, like, a little bit “skanky” if you like, and I repeated that to him and he yelled at me for about half an hour for not sticking up for her.

He used to get physical sometimes, like, I did get beaten by him a couple of times. Which then made the whole divorce thing really confusing, because my Dad then wanted to take full custody of me because he didn’t trust my Stepdad around me. But I think it was more so, like, I don’t know — it was not being used to that sort of treatment, because my Dad never treated me like that. So, it was just a different sort of environment when I lived with Mum.

What is a quality that you love about yourself?
I know it doesn’t sound good, but I don’t take things too seriously. Like, I’m able to let go of things. So if someone upsets me, I’m able to process that and let go of it faster rather than holding on to it. And I think that’s important, because if you let everything upset you you’ll never get anything done, and you’ll always be upset and angry. So I think being able to let go of things sometimes is really important.

If you had one piece of advice for your younger self, what would that be?
I think the advice I would give my younger self would be to always — just do what you want to do. So don’t worry about what other people are doing, don’t think you have to follow what they’re doing, because the stuff you love you’ll fall into anyway. So just always stick true with what you like to do, and the rest will sort itself out.

What advice can you share with others who may be going through similar experiences that you have overcome?
I think especially — and again, because I was so young, especially around the stuff with divorce and that, I think a lot of people can get very angry because of their situation. I know I used to look at my other friends, and they had their perfect families, if you like. And I used to sit there and be like, ‘my parents used to argue on the street’ and stuff like that, and I just used to always think that it was so unfair that my friends had it so much better than me.

But the older I got, the more I realised that the anger I had towards my parents for being divorced — if they’d stayed together, I think it would’ve been a lot worse. So I think the thing is to understand that your parents have done this for a reason, and that they still love you, and that — like I said before, being able to get on with everything and looking at the positives, and the fact that both of your parents are going to be happier apart than together, and trying to be less selfish about the situation actually makes it easier for you in the long run.