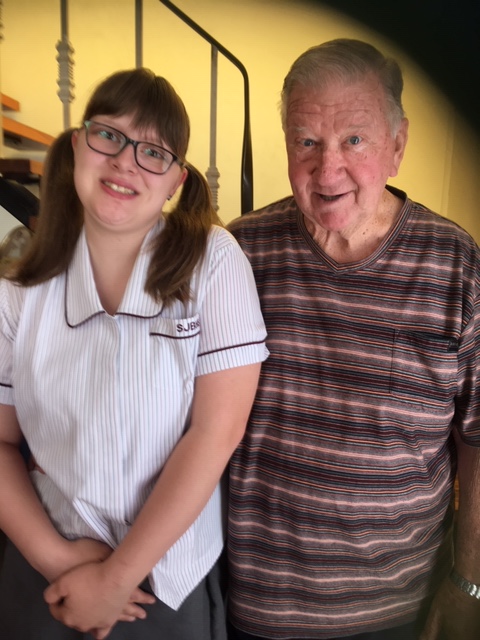 Wonder how much Australia has changed in seventy years? Hannah interviews her grandad Graham, who shares a lot of insight into life back then.

Okay. Can you please introduce yourself?

My name is Graham Web. I live in Padstow, and I am 76-years-old.

When were you born?

Can you describe the area where you grew up?

I grew up in a very busy area. Um, at Sydenham. Tempe. That’s down near Erskineville and all those inner suburbs, uh — suburbs.

Was there anyone that inspired you, and if so why?

Yes, my father. He inspired me. He taught me, um, how to do little things which led into big things. He, uh, I used to help him paint the house, and I went with him when he went to work, and I helped him on Saturday mornings when I could go down and not go to school. I used to help him and he taught me a lot.

What does strength mean to you?

What does strength mean to me. What, what do you — I don’t understand.

Mmhm. What has been your biggest achievement and how has it impacted you as a person?

Oh, my biggest achievement is to put food on the table for my family. And I got married, and that was an achievement in itself, and uh, then I went to work and I got paid every week, and I had enough to buy a house. And, um… look after my children. And now my children have got children.

What was your biggest struggle to overcome, and why?

My biggest struggle to overcome? I just had many, many little struggles, nothing major. I don’t know, um… difficult to overcome… oh, I don’t know. I really couldn’t define that.

Well, we went through our hardships, and when we were first married it was hard. We went away, we came back from our honeymoon, we had very little in the bank. So we had to go to work, and my wife Dianne, she went to work in office work, and I went to work in the boot factory. A boot factory; doesn’t make good money.

Then when I finished the boot factory, I got into the metal trade. One of my friends said, ‘Why don’t you come and work down here’, so I approached the boss and got a job in the metal trade. And I found that I was struggling there, so I had to go to tech. I didn’t have to, I went to tech. And I got all my certificates for, um, metalwork and welding and all sorts of things to do with the metal trade. And that, but that was a good thing to overcome. Yeah.

What were your life goals and have you achieved them?

Ohh, my life’s goals were to keep out of trouble. Be good, look after my wife, tell her to be good, and that was about, you know, just raising the family and yeah, that’ll do.

So I’ve heard you’ve become a beekeeper, what was your biggest challenge to overcome?

Well, I became a beekeeper because I could not grow passionfruits. I used to love the passionfruit vines I had many years ago, but then there were no bees in this area. So I decided to set up a beehive, which I’ve always been interested in ever since I was sixteen. And I didn’t know how to do it and what was involved, so I went to a bee club, and they taught me how to care for your bees and look after the queen. And then they taught you how to rob the hive, which was quite good. And, um, well now I’m a beekeeper.

So, within, throughout your whole life, has anything major changed around you?

Everything’s changed! I used to live in Tempe, Sydenham like I said before, and that was on the flight path to Mascot aerodrome. And when I was a young fella, we used to get propeller airplanes coming in. And then later on in life that changed to jet engines, and I’ve seen changes in the rail system. When I was first there they had wooden cars, and then they went to the, uh, red rattlers as they called them, and they used to rattle down the train. And if you wanted air conditioning you had to tuck your head out the window.

So everything’s changed in my lifetime. Computers; when I was a lad we didn’t have TV! TV started, and then it took us a few years to, uh, get TV. Excuse me [coughs] and we did, so I’ve seen the media game change. So, uh, I’ve seen a lot of changes in my seventy years.

Okay. Well, thank you for the time for interviewing you, grandad. That’s alright

Always a rainbow after the rain