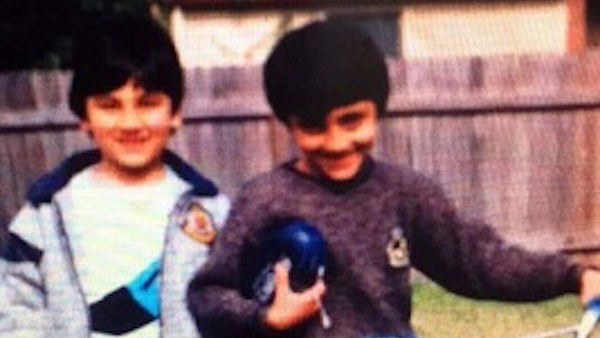 A nomad at heart, Matuse strives to live in the present, and prefers working towards goals than being lost in dreams. As one of Sydney’s most prominent rappers, Matuse is adamant that one’s strength and character are defined by how they bounce back from experiencing tough times. Enduring major setbacks of his own, Matuse has always maintained a positive mindset, and has worked hard to achieve his childhood ambition of touring the world as a hip-hop artist.

What is your name?
Matuse. I’m like Madonna; I just have one name.

Where were you born, on what date and in what year?
I was born in Auburn hospital, 1985.

Describe the place you spent your childhood
I grew up in Riverwood. [A] great place to visit, yeah. And growing up… It was a very interesting childhood because in the area, back then, it was a very troubled time. I saw a lot of bad things, I guess. When I was really young, like 10, I’d see other older teenagers fight each other, and I saw stabbings and cars being stolen and smashed into the wall just for fun. [While] growing up I never understood the extent of all of that; I found it funny, or just entertaining as a young person. You only know your experiences. When growing up it, was an eye opener. But I was only used to what I had known. So, when I started travelling outside of my area, and became older, I started to realise that my experiences were not conducive to everyone else’s experiences, and that was a real eye opener. But my childhood was pretty good; I had a brother and a sister and we had humble beginnings – but there were a lot of fun memories. I remember, one time, we had different kinds of ninja weapons, and we used to use t-shirts to wrap our heads so we looked like ninjas. We would sneak out late at night, and we had a little ninja club. We would run around the area thinking we were ninjas.

So, you answered both questions. You described a sensory memory… Where do you live now?
I’m a nomad, more than anything, so I don’t have a place I call ‘home’. I have multiple places [where] I lay my head, so I spend my time between Brighton and Campbelltown in Sydney. I also live in Harlem, New York, to which I am returning to soon.

Does it feel like home?
You know, over time, I have learnt that home is where the heart is. So long as you feel [at] home within yourself, you’ll always be in a place called ‘home’. I’ve had to let go of the idea of a physical home because I don’t feel attached to any one particular place anymore. I don’t feel I have a tangible home or an identifier – like a landmark. It’s more about people; you feel at home with people. That’s what it’s become, now. It’s home when I feel connected with certain people. There are places in New York and New Jersey where I felt more at home than anywhere; I feel the same way about here. I feel the same way about places like Egypt, as well. Wherever you build a connection with people, it becomes home.

A good description. What dreams do you have for your future? What dreams did you have for you future when you were young?
I have goals; I don’t have dreams. I have dreams when I sleep. I [used to] have dreams, but then I realised that a dream is merely something you hope for. A goal is something that you’ve put a plan in order to attain it. So, I no longer dream, I scheme, you know what I mean?
So, I guess my goals are to pursue my acting, to eventually get around to publishing a book that I wrote, to create some more art, and travel. Get more into the film and television world, with a bit of theatre.
As a young lad, I had dreams galore. I had dreams and dreams; I was a dreamer. Growing up, one of my biggest dreams was to be a hip-hop artist who put out some music and performed and toured. I’ve had the opportunity and blessing to do [that]. Another one of my dreams was to be able to act, and I’ve been able to do that as well. Another one of my dreams was to live in New York, and I’ve done that as well. So, I think growing up, I had a lot of these hopes and dreams, and I didn’t necessarily think I could attain or actually pursue. But one thing I’ve learnt in life is [that it’s] full of surprises. Just because it doesn’t look that way today, doesn’t necessarily mean that tomorrow [won’t] provide you with a different means. You just never know with life. And I’ve learnt that you never know what’s around the corner – even if you think you know. Even if it seems so clear, you actually do not know. It’s really awesome to think back as a young man, and think “wow! A lot of this stuff that I really hoped I was able to do I am doing. Or in the pursuit of doing. Or I’ve done.”

What does strength mean to you?
Strength is when you are put into situations that can destroy you, but you recognise them for what they are; [a] strengthening. I look at it in the same way that a diamond is made from pressure – pressure on coal – and it forms into such a beautiful thing. Or if you look at somebody who goes into the gym; they put strain on their body in order for their it to develop itself and to become more elite. I think strength is the positive reaction you gain from pressure, from responsibilities, from putting in work, and really trying to achieve things. I think strength is knowing that when you fall, that you have to get back up. That you have to continue. That you grind. That you expect to fall.
There is a saying: “the strong person isn’t the one who can wrestle the other person to the ground. A strong person is the one that can wrestle their own anger to the ground”. It’s like the strong person is the one that can wrestle their negativity to the ground, then pick their positivity up from the ground. I think the times when you feel your weakest are the times that bring you to your strength.

What is the most difficult thing you’ve had to overcome?
Mishaps, setbacks, let downs. I think most people, especially at a younger age, have expectations about life and goals. I see a lot of people say “I cannot wait; in three weeks, I’m gonna go do this”. They live in this idea that in three weeks they’re doing something – they don’t live in today, they live there. And I think that’s the worst thing you can do to yourself, because you’re living in a time that doesn’t exist or may never exist. You’re building it up to an expectation that may not come your way. When you’re thinking about all of that stuff, you’re losing the opportunity of living now, embracing the now, and being part of the now.
I think growing up [was] one of the hardest things; I had to deal with not having any more expectations to learn not to live in the future, but in the present. And to embrace ‘the now’. I’ve had some severe setbacks; I tore up the muscles in my leg and I couldn’t walk anymore. I had to learn to walk again. I’ve had set backs when it comes to having to start all over again; where you go into business, move, and it doesn’t work out the way you want it to, and you’ve got to start from complete scratch. And these are the times, in life, that really make you and shape you. So, they’re the blessings; I think the hardest things that I’ve gone through have also been the most beneficial things.

How did you turn that into a personal strength?
The way you look at the world is your world view, and how you perceive the world is going to affect how you live in the world. Everyone’s perception of the world is going to be different, slightly, because we all see it from our own perspective. And because of that, you have a certain sense of control over the way your world is for you. When I realised the power I held inside, I recognised that if I think negatively, and I live negatively, then I’m only going to attract negative energy my way. Things are always going to be seen in a negative light. I’m going to live negative, and things are not going to go my way. Once I recognised that there’s power there and control there, I was able to do the opposite, and look at things in a positive way. So, even stuff that came my way that other people saw as negative, I would look at it in a positive light and was able to see the benefits of it, then take advantage of that. Because, this is the thing, usually when something bad happens to someone, they get angry and they get upset. They get frustrated, and allow the anger, the depression, and the frustration to stay with them. That’s the biggest issue, because if it puts you in a miserable state for the whole day, you’ve thrown away your whole day. You didn’t gain anything from it; it didn’t help you in any way. But if you look at the situation and say “alright, I recognise that this and that are not going my way – I’m going to do something about it.” Instead of dwelling and complaining, you become productive and proactive, and you start seeing benefits. That’s when you realize that’s the only way to live, and that’s how you’re going to gain more in life. So you begin to implement that. It’s trial and error, but take these words and implement them, while you’re young, while you can.

Could you tell me what life means to you?
Life is a journey, life is a test. Life is an experience of the soul, and the soul is in the vessel, and the vessel is the body. And the soul is on a journey; this isn’t the first place it’s been. It’s the second place it’s been, and it’s going to continue on a journey in five stages. So, I think life, in its essence, is like going to a university or a college, or going through these experiences to teach and train your soul to be ready for the next part of this journey. I treat life as a passage; [as a] stranger to this world and a traveler to the next.

Strength in asking for Help

Managing in the Face of Adversity